Never heard of this game? Not surprising. This turn-based J-RPG is loosely based on Joan of Arc, the heroine of France during the Hundred Years War with England. The game is a fantasized take on the historic event adding in anthropomorphic animals, mystical beasts and demons. This was one of the first few games Level-5 has developed, the same developers who gave us amazing games such as Professor Layton, Ni no Kuni and Yo-kai Watch. Now what exactly is this game about and should you go and play it? 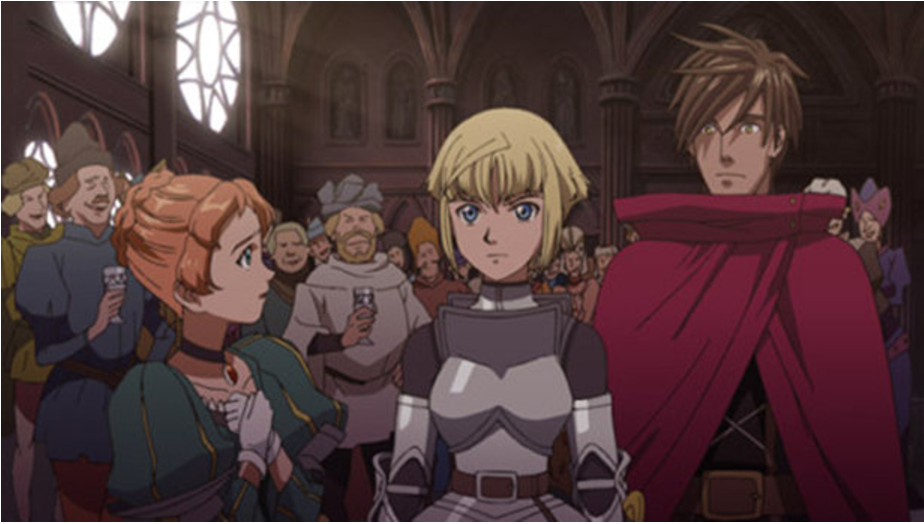 As said, the game is loosely based on Joan of Arc’s story. It all starts with the invasion of Jeanne’s hometown, Domrémy by English Troops. Instead of ordinary troops, there are beast and demons that are taken controlled by the ruler of England, King Henry VI who is possessed by a demon lord. Jeanne, along with her friends, Liane and Roger embark on an adventure to avenge the destruction of their village. Jeanne is bestowed a magical armlet that allows her to transform into an OP knight. In addition, the armlet speaks to her, like how in the actual story St. Michael spoke to Jeanne. Along her journey, she will meet up characters both true to the actual historical story and not.

Jeanne and her group of friends will battle the English Army throughout the game to take back France. The twist however is that there is a deity called Gilvaroth who manifests in the body of King Henry VI. Gilvaroth and his gang of reapers are spread out to different main bosses throughout the game. But eventually she faces up and defeats every reaper along with King Henry VI, saving all of France from his tyranny.

Jeanne D’Arc is a turn-based J-RPG similar to the Disgaea series or Final Fantasy Tactics. The game has the usual attributes of any J-RPG of that time. So, there is equipment customization; skills, weapons and armors. Not to mention the plethora of maps that are just for grinding experience points. The game has a Rock-Paper-Scissors mechanic that sets out strengths and weakness to one or the other. Characters have a number of skill slots to put in magic skills or buffs to increase health, strength and etc. 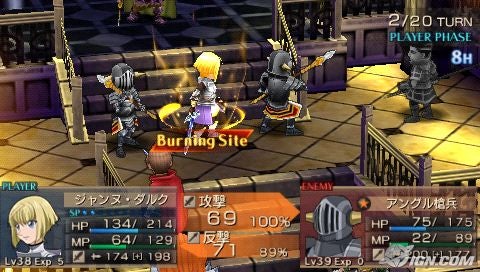 The game adds in unique mechanics into the gameplay besides the usual turn-based J-RPG mechanics. “Burning Aura” is a mechanic when the player attacks, an aura forms on the space immediately behind the target of the attack; a second character can move into that space and strike for extra damage. If a character is already in that space, the aura moves with them. “Unified Guard” is another mechanic where if 2 or more characters are one space away from one another, the chance of a hit or the damage would be reduced. 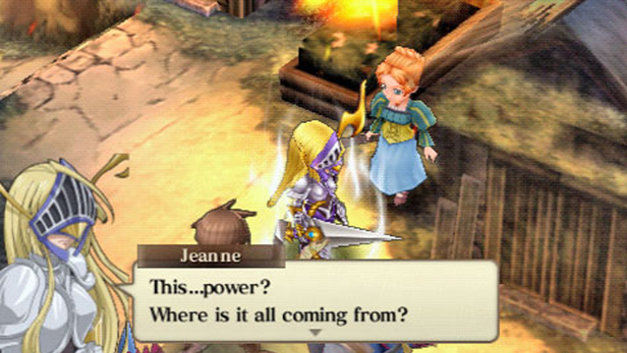 The armlet that Jeanne and some of her party members get, has the power to transform them. It gives them enhanced stats and special skills to become really strong in battle. With every kill done by the transformed character, “God Speed” is casted, this grants the character an additional move. So, it’s essential for the player to strategize properly in order to smite their enemies hard, fast and effectively.

Jeanne D’Arc was one of my first few J-RPGs that I played to completion. The overall game difficulty is a lot easier than any other J-RPG that I’ve played. There isn’t much grinding needed to be done to move forward into the story and defeat the bosses. The game mechanics are really simple to learn and master. The animated pre-rendered cutscenes look pretty well-made though the voice acting in the English version was a bit off. In conclusion, should you play this game? You totally should! This game does not fall short from any other turn-based J-RPG. It adds in its own unique twist into the J-RPG genre with the additions added while not being overcomplicated. The idea of mixing actual history with a fantastical twist is a really cool premise to go by. This is a major go if you want to play a turn-based J-RPG without sinking tons of hours into.

Hope you guys got some insight on what Jeanne D’Arc is all about. Tell us in the comments below what you think!