Disclaimer: The following article contains spoilers about Boku no Hero Academia (My Hero Academia) for both the anime and manga.

The one scene that sparked this theory to life is this:

When watching this scene, have you ever wondered why Dabi would mention Todoroki Shouto’s full name all of a sudden and with that taunting voice? Yeah, sure Shouto’s name might have been broadcasted aloud during the Sports Festival arc but the dramatic atmosphere of this scene made it seem as if there is a deeper meaning behind it.

Since that debut of our scarred fire user, fans started to speculate the possible connection that Dabi might have with the Todoroki family. Here are a few examples that support the theory that Dabi is a Todoroki:

The line, “That’s sad…Todoroki Shouto,” was spoken directly after Shouto failed to retrieve the marble that contained Bakugou in Season 3 Episode 45 of the anime and Chapter 82 in the manga.

One thing we do know is that Endeavor neglected his other children except Shouto. That negligence can also be in a form of abuse like when Todoroki Natsuo mentioned how Endeavor treated his family specifically to their mother, Shouto and “Big Bro Touya” in Chapter 192. Dabi’s taunting line to Shouto could be interpreted as the ‘masterpiece’ that Endeavor has produced finally ‘failing’ in front of the ‘failure’ he was supposedly referred to by Endeavor as a child. Another thing to note is that Dabi, before joining the League of Villains, committed no crimes that stood out and has taken to the Hero Killer’s ideals about how a Hero should act and how fake heroes like Endeavor should be eliminated (My Hero Academia Chapter 68). He has also claimed that he would be the one to fulfill the Hero Killer’s will.

Correlating to that is the ending of Chapter 191. Dabi could be seen remembering the hero he killed previously, Snatch and the words he said to him, “Have you never stopped to think about how their families feel?” Those words must have hit him hard now as you can see him shedding drops of tears (or blood) stating that he went crazy thinking so hard about it. 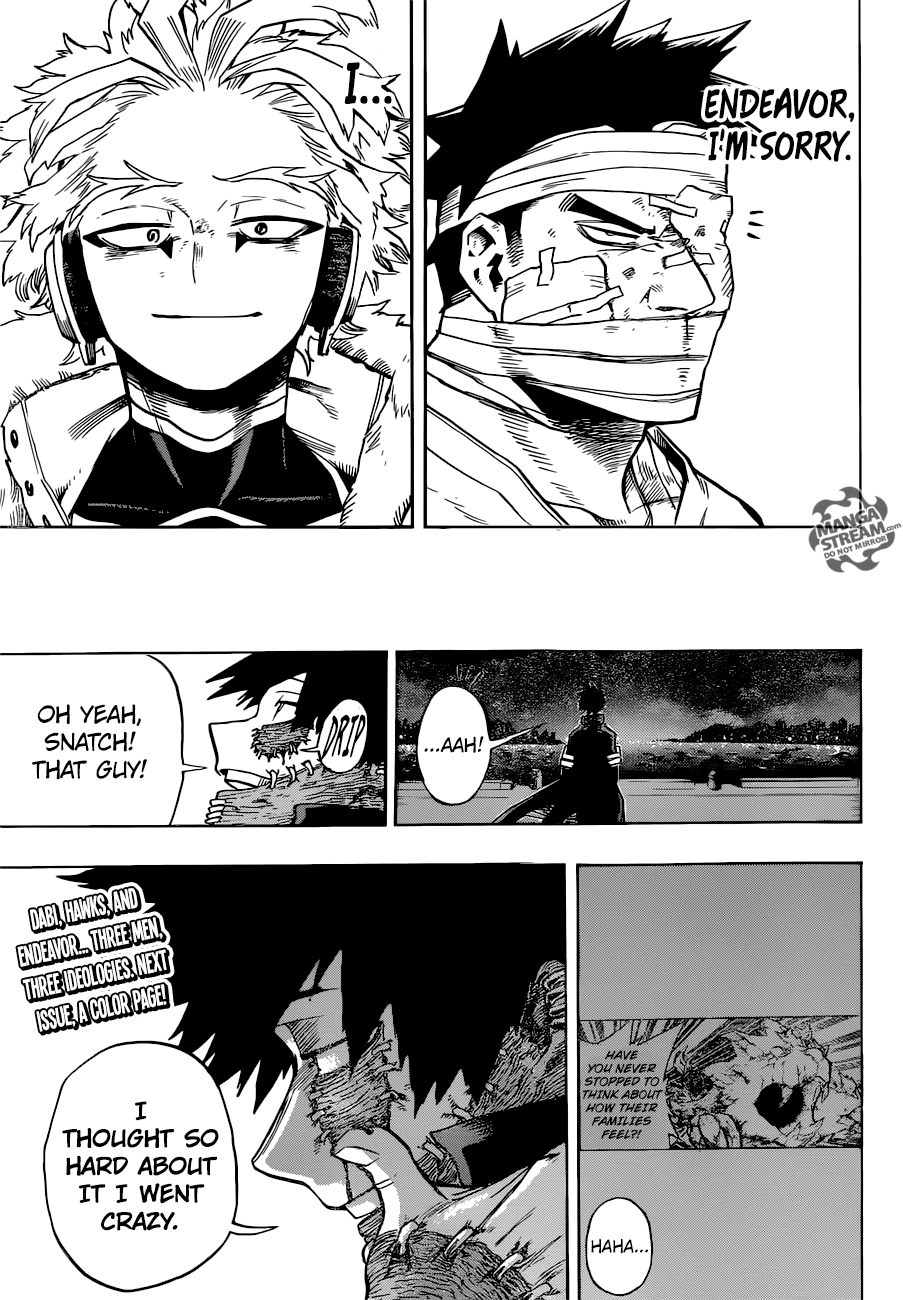 This supports the theory that he was from a family of heroes or has been affected by heroes somehow and do know how those families feel. Furthermore, if Dabi is really a Todoroki, he wouldn’t exactly have the fondest memories of being in a family of Pro Heroes, and this likely would have solidified the resolve of following Stain’s ideology that selfish Pro Heroes have no business in remaining alive.

When he was first revealed in the anime and manga, he mentioned that he goes by the name of Dabi now and he wouldn’t give his real name to Shigaraki with the excuse of “I’ll tell you when I need to.” (My Hero Academia Chapter 68)

Why would he find the need to hide his real name? Unless his name, particularly his last name, is well known within both the hero world and the villain world.

This correlates to the moment when the heroes managed to invade the League of Villains’ hideout during the Hideout Raid arc. Gran Torino mentioned the real names of all the remaining members of the Vanguard Action Squad present EXCEPT Dabi who was knocked out before that. (My Hero Academia Chapter 88)

He also mentioned that all their backgrounds were pinpointed by the police/detectives/boys in blue. But why did he not reveal Dabi’s real name? If he really was a background villain that has no huge impact on the storyline, the author might as well reveal his name there and then. Even if fans might argue that he was knocked out cold previously, the author could have just made an extra panel with his KO-ed face with his real name in the bubble like the rest if it held no significant role to the plot.

The possibility is that Horikoshi-sensei wanted to keep the name a secret and reveal it when the time is right since that arc’s main climax is the fight between One For All and All For One.

The Pro Heroes in the My Hero Academia world all work under a hero name, a name that usually isn’t the hero’s real name. Their hero names are widely known by many and usually used to refer to them unless by someone who knows them personally.

With that being said, Dabi calling Endeavor by his real name – his full name “Todoroki Enji”, no less – proves that he has a more personal connection to Endeavor. (My Hero Academia Chapter 191) 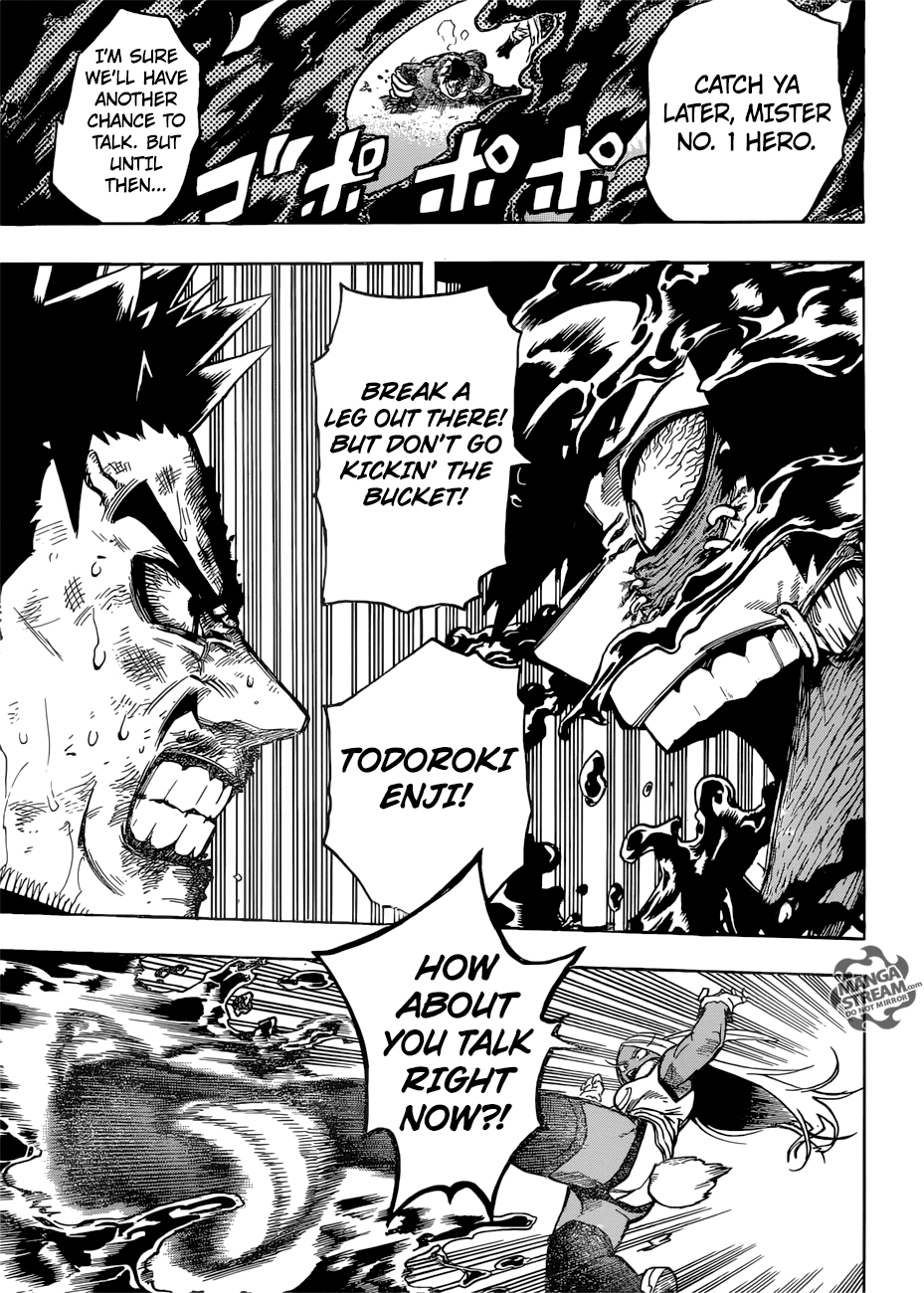 If we were to look from the standpoint of a villain disliking a hero so much that they would look up their real names to taunt them, then why hasn’t Shigaraki Tomura used All Might’s real name before, despite his deep hatred for the Symbol of Peace? Dabi specifically yelled aloud “TODOROKI ENJI”, telling him not to die so soon before disappearing. Furthermore, he does know Todoroki Enji by his hero name, Endeavor as he greeted him as such when they met in Chapter 190. 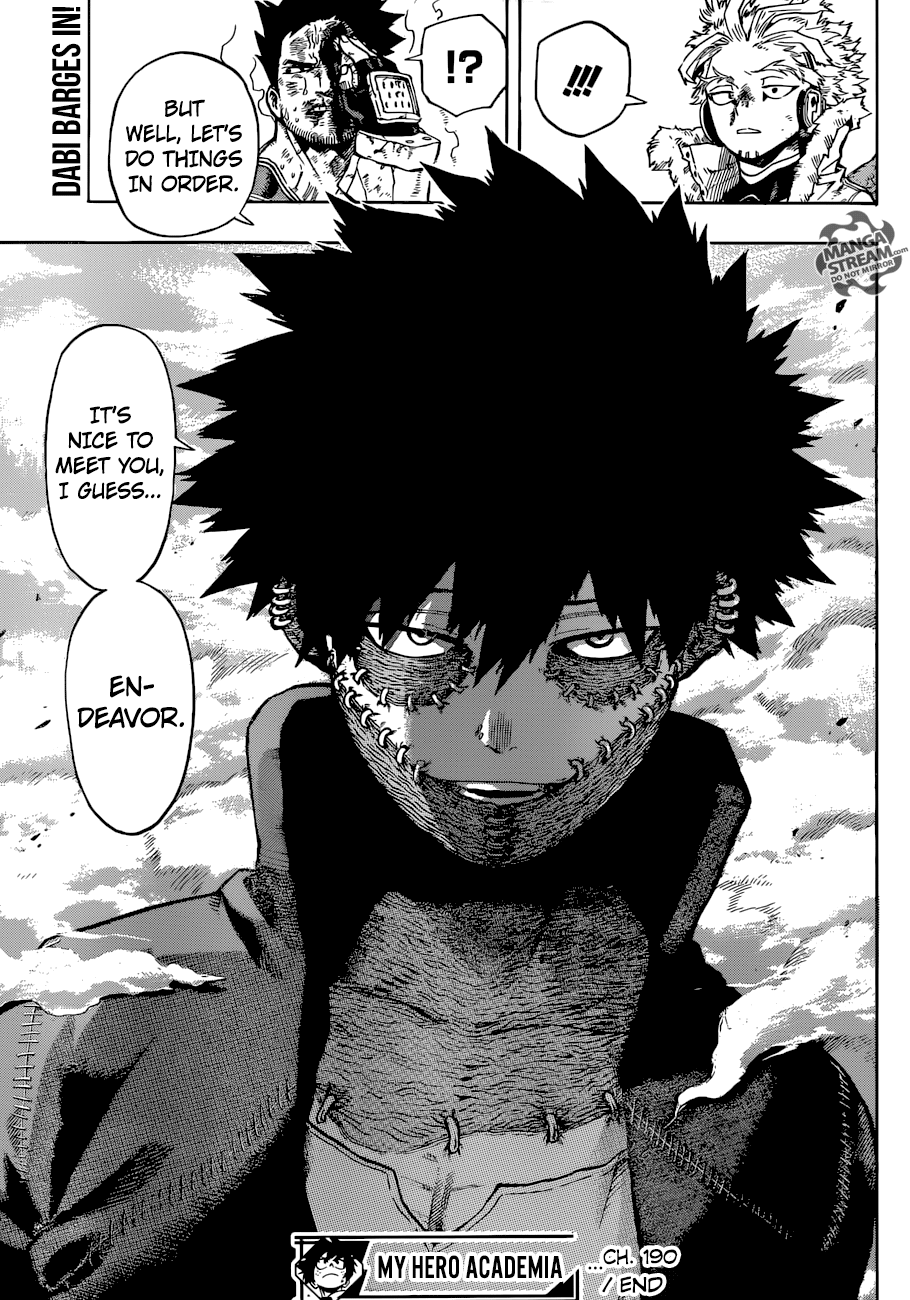 He doesn’t seem to have a habit of digging out every Pro Hero’s real name as he can be seen referring to Hawks, Mirko and Eraserhead by their hero names. Thus, this can be one of the few hints Horikoshi-sensei is trying to drop that Dabi is indeed a Todoroki.

Dabi has the same eye colour as Shouto’s left eye and Endeavor – Turquoise – which is not a common eye colour in the My Hero Academia world. 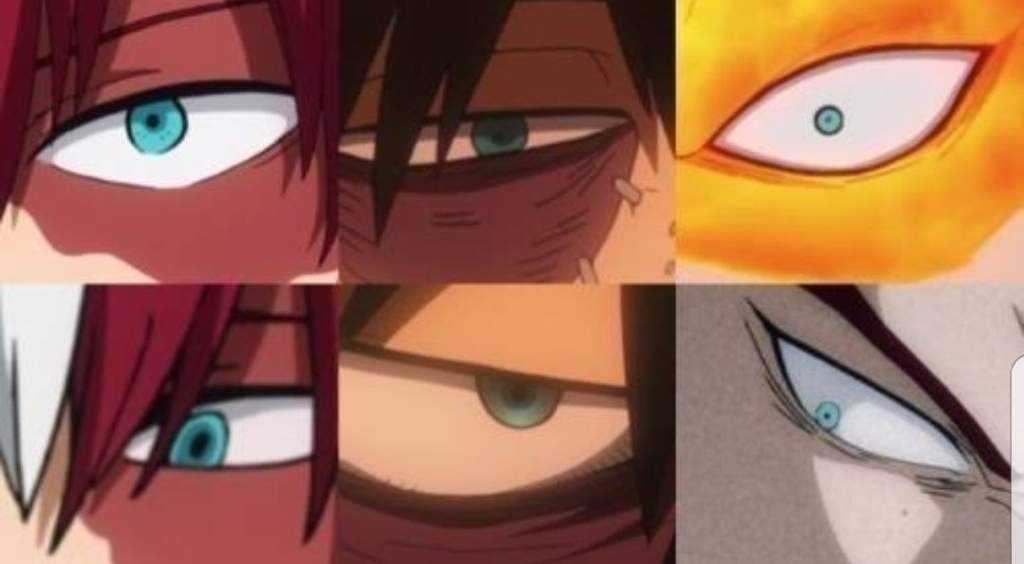 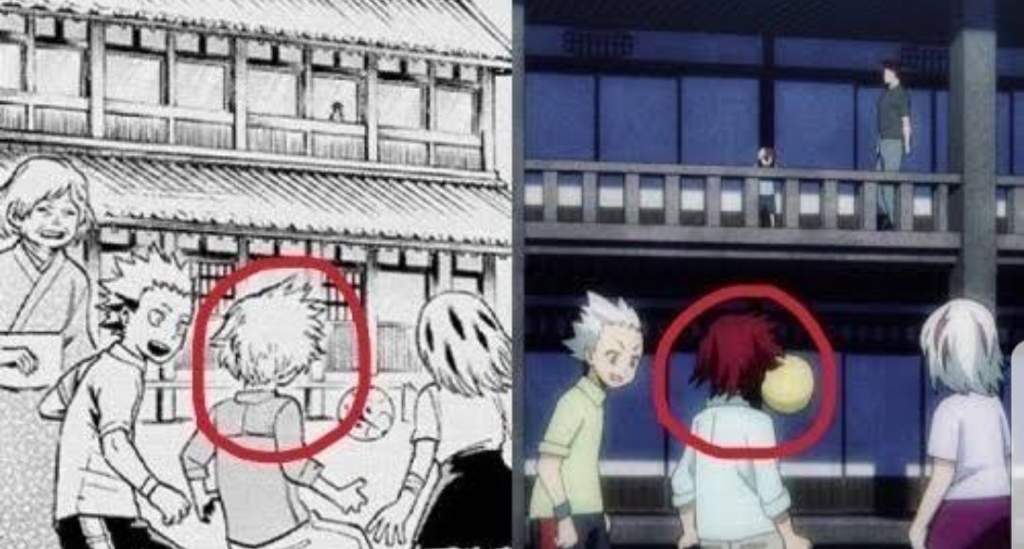 The colour change here from the manga and anime is certainly not an error as Horikoshi has stated in the manga that he had watched that episode. So if that is so, why the sudden change in colour?

And if Dabi were to be a Todoroki as the picture here suggests, he should have red hair, right? This is not entirely true as it was proven via Kirishima that hair dye does exist in this world. It was also shown in Season 2 Episode 31 of the anime right after Stain’s capture that Dabi was in front of a beauty salon.

He also handles his fire quirk similar to how Shouto does with his. This can imply that they both learned how to handle their fire quirks from the same teacher, who was Endeavor.

A theory would not be a theory if there weren’t fans trying to deny it.

One of it that I would love to tackle is that Endeavor and Shouto did not recognize Dabi when they met.

Dabi’s scars do not actually alter his overall appearance and if the hair dye idea was true, it wouldn’t create a drastic change that you wouldn’t recognize someone. So why do they not recognize Dabi?

Let’s start with Endeavor. When they first met face to face, it was after Endeavor had a harsh battle with High End. He was already injured in battle and it is self-explanatory once you read Endeavor’s inner monologue in this manga panel.

“My vision is blurry,” he said. If considering the fact that Endeavor barely sees the other ‘failures’ of his children face to face, Dabi altering his appearance and Endeavor’s blurred vision from the hard battle would make it difficult for the latter to recognize Dabi on the spot.

Now as for Shouto, his reasoning could be that he barely meets his older brothers. In Chapter 192, Todoroki Natsuo mentioned that Endeavor took special care to never let them ‘failures’ into Shouto’s life which implies that Shouto rarely meets them and could only watch them from afar.

To say that Shouto did not recognize Dabi at all is an understatement as in Episode 45 and in Chapter 81, there was a hint of recognition in Shouto’s eyes.

So is Dabi really Todoroki Touya?

In the end, a theory is still just a theory until proven by the author himself. It may have just been some of us fans over-analyzing minor details that the author did on a whim, but it is because of these theories that fans anticipate every new chapter or episode released week after week, in hopes that they will come true.

What do you think of this theory that Dabi is a Todoroki? Do you agree, disagree or agree with the possibility that Dabi is just Shouto’s half-brother? Let me know in the comment section below!

Bungou to Alchemist: Shinpan no Haguruma

Bakugou Katsuki: Love Him or Hate Him? – My Hero Academia

Is Anime Seriously Going Gay On Us? (A Commentary on Yuri!!! On ICE)