If you’re into the indie gaming scene, you have most likely heard of this action, tactical, puzzle RPG hybrid called Transistor. It’s made by Supergiant Games, yes, the same people who made the 2011 indie hit, Bastion.

Just like its predecessor which is highly praised for its amazing visuals, Transistor too is visually stunning but now with an in-depth battle system that’ll keep you experimenting through trial and error to get you out of battles alive. Almost each battle faced in this game is a unique puzzle in itself, and when you think you’ve got the hang of it, the game will throw you a curve-ball forcing you to change tactics.

The visuals of Transistor have a very similar hand drawn style to Bastion, keeping it visually stunning. It’s beautiful world has a futuristic mix of renaissance Italy and noir theme, supported by the fact that the soundtrack of the game is futuristic jazz. Plus the character you’re playing throughout the game, Red was a lounge singer turned robot annihilator. The soundtrack of the entire game fits perfectly with the visuals; every detail from beams of sunlight, bright city lights, to the heavy downpour and gently drifting snow.

When you’re not fighting to keep alive, there’s a button in the game which causes Red to hum along to the background music while a spotlight shines on her. It’s such a beautiful and creative way to integrate the music into the core game. In more ways than one, music is the pinnacle pillar of this game’s greatness. 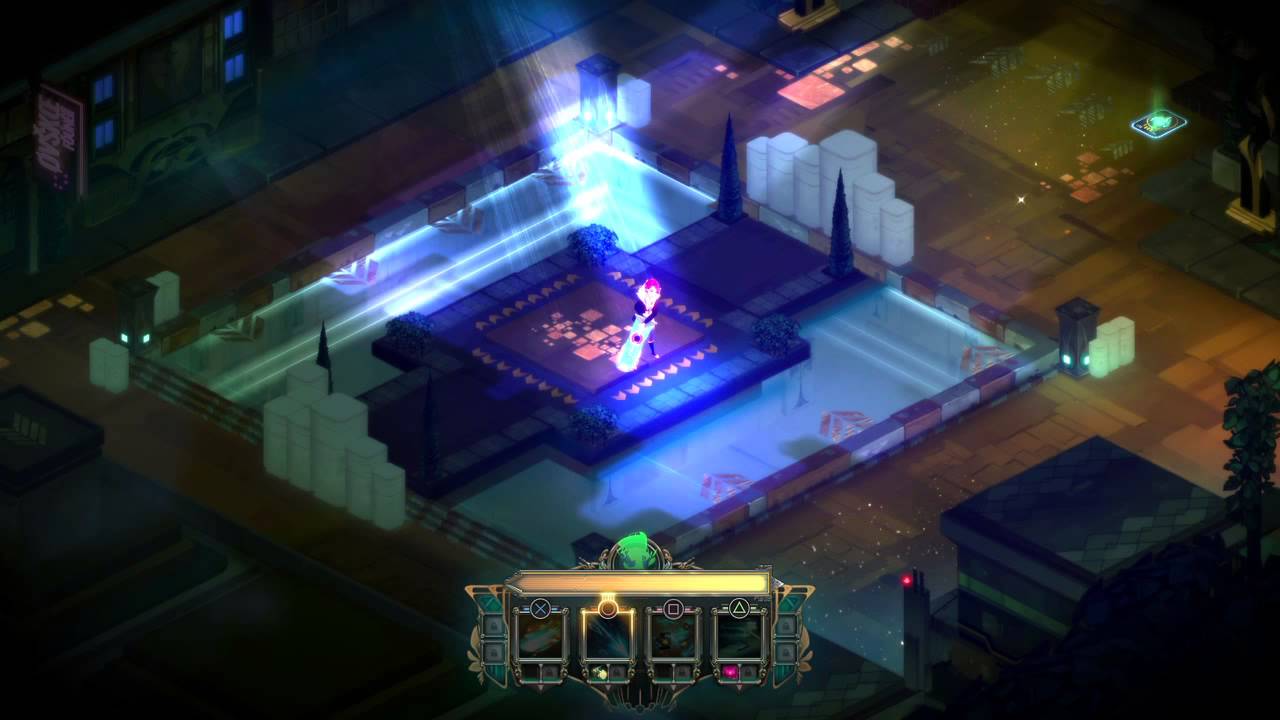 The way Transistor tells its story is not exactly direct. Throughout the game you’ll be wondering what happened before you picked up the sword to fight. It gives you the freedom to fill in the blanks of what’s going on. The pacing of the entire game is soothing in many ways and it’s not too serious throughout.

Since Red lost her voice due to plot reasons, she’s mostly mute throughout the game. To compensate for that, her talking sword acts as a narrator in every scenario that Red is going through. But that doesn’t keep Red a husk of a character. Her hums and body language gives her an in-depth character through these subtle expressions. It’s little details like these that keeps the game amazing.

The battle system in the game in my opinion, is one the best parts of Transistor. It is a hybrid of action role-playing and tactical role-playing games. This gives it a unique style of gameplay that both can be played real time or with Red’s special ability to freeze time for you to strategize your attacks.

Freezing time and strategizing enables Red to carefully choose the actions you want, to inflict as much damage as possible to your enemies. Executing your strategy will then have Red do the actions you planned. Watching her successfully kill an enemy with those actions you planned will always be satisfying. The only complain is that sometimes the buildings and environments block the camera during battles, but even then, that happened rarely throughout my playthrough. 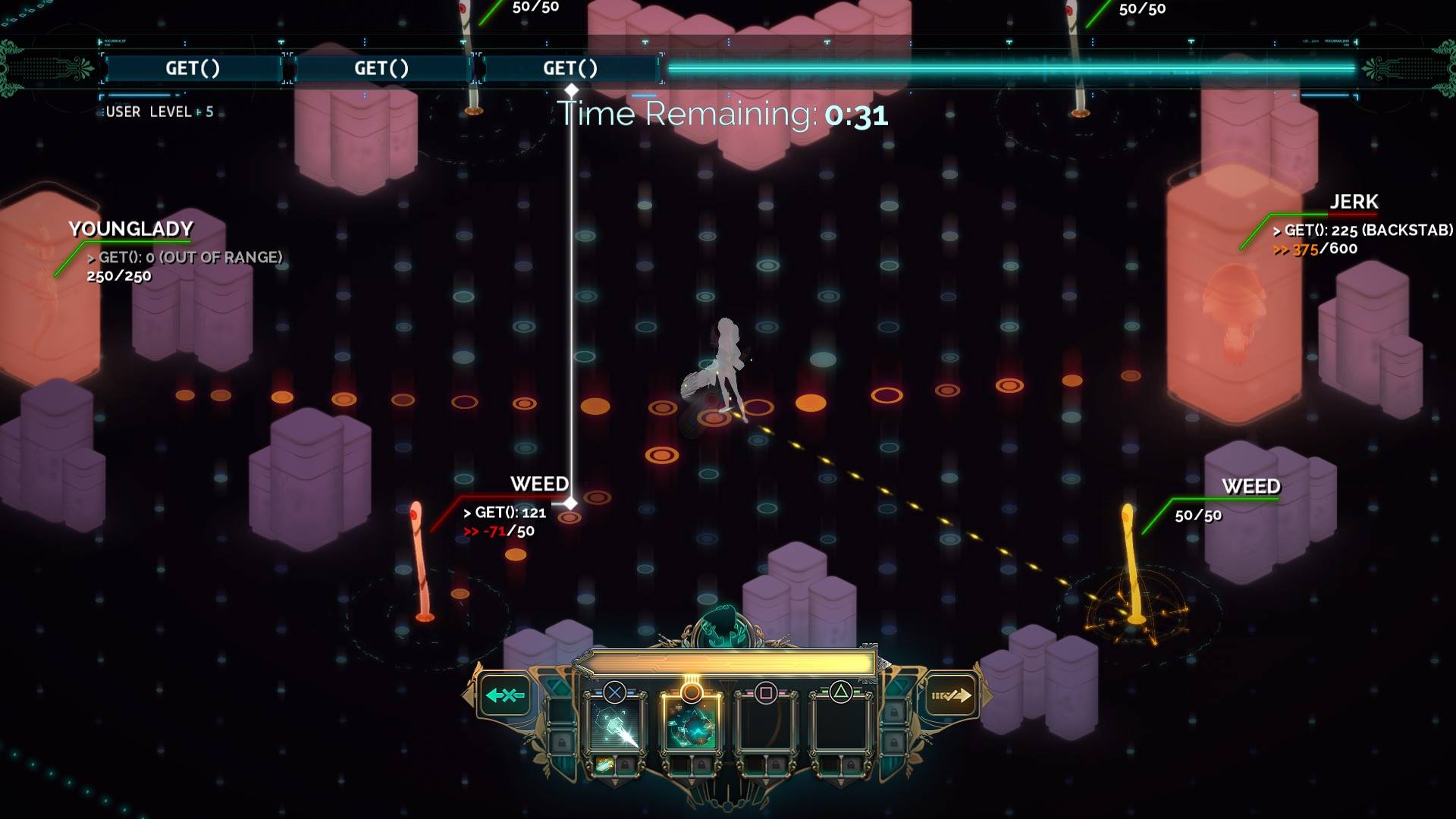 Transistor allows you to use your imagination and playstyle best suited to defeat the enemies in your own way, encouraging you to experiment with the game’s plethora of skills both active and passive. In addition to gameplay, there’s a rest area that takes you away from the grim looking city of Cloudbank and transports you into a relaxing, light-hearted beachside. There, optional challenge rooms await you. You can also listen to the entire soundtrack using the music player and play some beach ball with Luna, the adorable digital doggo.

To conclude, Transistor is a major go. This is a seriously solid indie game that mixes all three visual, music and gameplay harmoniously and not sacrificing either for the other. It’s such a complete and in-depth game all while being cheaper than a AAA game. Even when completing the game for the first time, it’ll want you coming back for more on new game plus, with all the skills that you’ve gotten from the previous playthrough being brought over.

But now the battles are way harder, so you don’t feel like you’re going through a walk in a park in your 2nd, 3rd or even on your 4th playthrough. In addition, you’ll still be discovering more things that you’ve most likely missed during your first playthrough and learn more about the amazing story in the world of Transistor.